Over the past few weeks I’ve gradually been migrating services from running in LXC containers to Docker containers. It takes a while to get into the right mindset for Docker - thinking of containers as basically immutable - especially when you’re coming from a background of running things without containers, or in “full” VM-like containers. Once you’ve got your head around that, though, it opens up a lot of opportunities: Docker doesn’t just provide a container platform, it turns software into discrete units with a defined interface.

With all of your software suddenly having a common interface, it becomes trivial to automate a lot of things that would be tedious or complicated otherwise. You don’t need to manage port forwards because the containers just declare their ports, for example. You can also apply labels to the application containers, and then query the labels through Docker’s API.

Reverse proxying and SSL termination with Nginx and Let’s Encrypt

A fairly significant chunk of the software I run has a web interface. I don’t really want to expose and remember dozens of non-standard ports, so I configure an nginx instance as a reverse proxy. I’m of the opinion that all web traffic should be encrypted, so I also have to provide nginx with trusted certificates to use for each site it reverse proxies. Let’s Encrypt makes the process of obtaining free, trusted certificates approximately a thousand times easier than it was previously, but my workflow still ends up looking like this:

… And that’s not including the extra steps when I miss a semi-colon, accidentally skip a step and have to spend time figuring out why it’s not working, or any of the other human-induced problems that creep in.

I’d been toying with making a script to run through these steps manually for me, if I gave it a domain name and a reverse proxy target, but I never got around to it. Now I’m moving things to Docker, though, there’s an opportunity to automate the entire thing with no human interaction at all.

It seemed like this probably wasn’t a unique idea, so I had a look around for existing solutions. The most popular by far seems to be nginx-proxy by Jason Wilder. This is based on his docker-gen project that takes a template and populates values from docker containers.

It’s a good solution, but there were a few bits I didn’t like. Firstly, templates don’t really lend themselves well to every step of the process: to request Let’s Encrypt certificates, the container uses a template to create a shell script which it then sources. Each container that generates a template also needs access to the Docker socket. Both of those cause an itch in the back of my head and make me want to say phrases like “attack surface”. I don’t think there’s actually a problem, but it doesn’t really sit well with me.

Secondly, the whole system seems slightly too tightly coupled for my liking. The Let’s Encrypt component needs to modify the nginx config in order to obtain the certificate, while the main nginx component is also making different changes to add and remove sites. It feels like if it doesn’t just work, it’s going to be difficult to debug and pry apart the different components.

Another potential solution is Rancher. This is a complete platform for managing containers, and I’m fairly sure if configured right it can grab certificates from Let’s Encrypt and do SSL termination using haproxy. I tried it for a bit but the whole platform seemed a bit overkill for my purposes, and I didn’t want to invest the time I’d need to fully understand it all.

In the end I decided to roll my own solution. Here’s a high-level overview of how it all works: 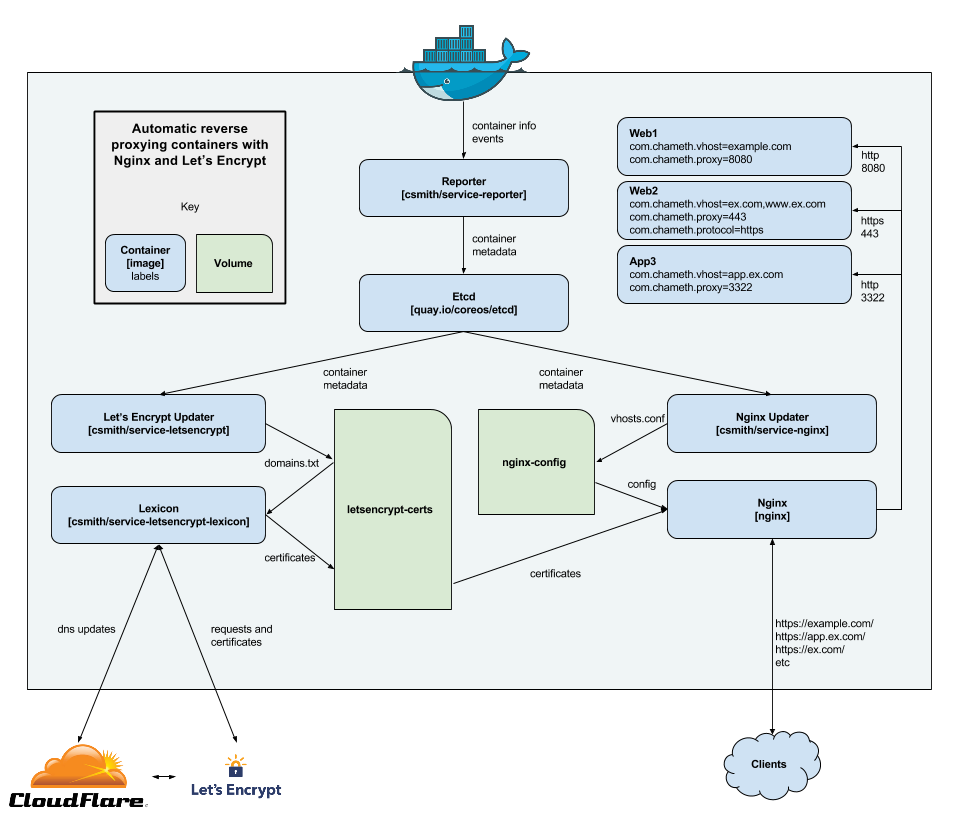 As you probably noticed, there are quite a few containers involved. Each one performs a small, well-defined task, and its output can easily be inspected in either a volume or a database. I think there’s some similarity to piping commands together on a command line — it’s a lot easier to reason about simpler commands like head, cut and tr than it would be one giant command that combined them. And, if it does go wrong, you can inspect the pipe at each stage to see where the problem is happening.

The first part of the chain is my service-reporter container. This uses the Docker API to get a list of containers, and store information about them in etcd. Etcd is a distributed key-value store (similar in some ways to redis or memcached). The container also watches for containers that are added and removed, and keeps etcd updated appropriately.

As the service metadata is stored in a database, no other part of the system needs to interact with Docker. If the Docker API changes, or the host configuration changes, then only this container has to be updated.

The left fork of the diagram deals with obtaining SSL certificates. To keep it separate from the nginx configuration, it uses DNS-based challenge to prove that we control the domains. It does this by plumbing together two great open source projects: letsencrypt.sh, a Let’s Encrypt client implemented in bash with support for the dns-01 challenge type, and Lexicon, a python library for updating DNS records using a variety of providers.

My service-letsencrypt container connects to etcd and pulls a list of containers that have a label with the key com.chameth.vhost. It uses this to build a plain text list of certificates we require (in a format understood by letsencrypt.sh), and then monitors etcd for changes and repeats as necessary.

The letsencrypt-lexicon container runs letsencrypt.sh, using Lexicon to perform the required DNS updates, and produces certificates. The nice thing about this is that it can be used in a completely standalone fashion (you can just write a domains.txt yourself). It uses iowait to watch the domains text file for updates, and automatically reruns when there are changes. It also runs once a day to renew any certs that are coming up for expiry.

The right fork of the diagram is concerned with nginx. My service-nginx container again connects to etcd and pulls a list of containers. It uses a couple of labels to determine the vhost, proxy port, and proxy protocol. It then feeds these values into a template to create a server block for each site, configured with SSL certificates and a reverse proxy setup. The template covers only the very minimal settings, with the expectation that everything else will be done in the global config (things such as SSL ciphers, redirection from HTTP, etc).

Putting it all together

The only downside to having many small containers is that it’s a bit of a nuisance to get them all set up. Fortunately, Docker has a solution for this in the form of Docker compose. This allows you to write a YAML file defining all of the services you want to run, and bring them up or down in one go. It can handle volumes, dependencies, networking, etc. I’ll be publishing a docker-compose.yml file to get this entire stack up and running soon.