I recently came across a useful tool on GitHub called ssh-audit. It’s a small Python script that connects to an SSH server, gathers a bunch of information, and then highlights any problems it has detected. The problems it reports range from potentially weak algorithms right up to know remote code execution vulnerabilities.

This is the kind of output you get when running ssh-audit. In this particular example, I’m looking at GitHub’s SSH server and have filtered the output to just warnings and failures: 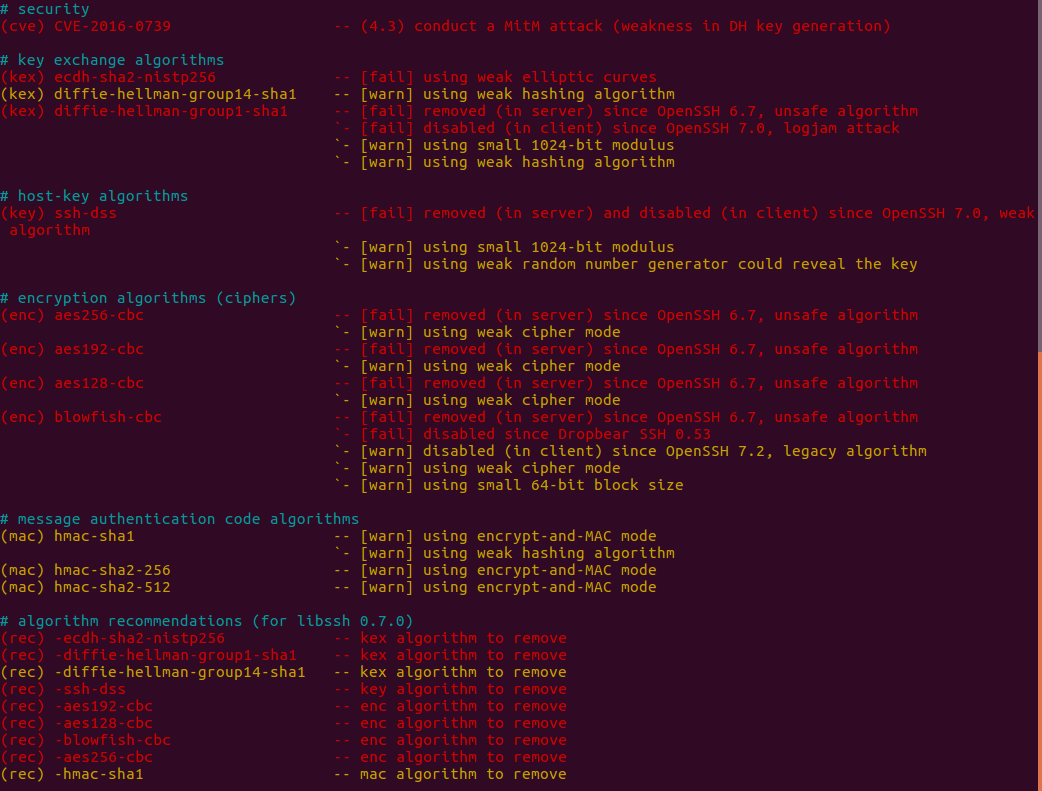 GitHub’s a bit of a special case, as they’re trying to cope with scores of developers pushing code: they can’t disable weaker algorithms without also stopping lots of people being able to use their service. Still, from the output you can see that ssh-audit has spotted a known vulnerability (CVE-2016-076) and has a lot to say about the various types of supported algorithms.

Establishing an SSH connection is a moderately complex endeavour, and various parts involve the use of a number of different cryptographic algorithms:

The first such algorithm is the key exchange algorithm. This is the process by which the client and the server agree on a shared key that will be used later. Next comes the host-key algorithm; this is how the server proves its identity to the client. Most SSH users will be familiar with warnings like the following:

The warning means that the SSH client doesn’t recognise the server’s key, and is asking the user to confirm it. If the key changes later, the SSH client will refuse to connect. In the warning above you can see the algorithm used by the server was ED25519.

Next up is the encryption algorithm, which handles actually encrypting the data sent over the connection. Finally comes the message authentication code algorithm, commonly referred to as ‘mac’. The mac algorithm is effectively responsible for signing each message as a proof that it came from the other party.

ssh-audit’s recommendations are pretty easy to follow. It points and shouts at a particular algorithm, and you configure SSHd to not allow it. This is a snippet from my new SSHd config, which gets no complaints from ssh-audit:

What’s more interesting is the reasoning behind some of the algorithms removed. The ecdh-sha2-nistp series of key exchange algorithms are subject to a sidechannel attack described in a paper in 2014. Some people are also concerned about the involvement of NIST, and the potential for backdoors. Various other key exchange algorithms use too small a number of bits in the key exchange (e.g. diffie-hellman-group1-sha1, which uses 1024). Others still use known-bad hash algorithms (e.g. diffie-hellman-group14-sha1, which uses an acceptable 2048 bit modulus, but relies on SHA1 hashes). ssh-audit only treats the use of SHA1 as a warning, but there’s no compelling reason to keep it around if you’re using remotely modern clients to connect. Similarly the host-key DSA algorithm uses a 1024 bit key, so should be disabled.

Many of the rejected encryption algorithms use basically-broken algorithms (3des-cbc and arcfour for example). Some of the remaining are block ciphers with small block sizes, which makes them weak (e.g. blockfish-cbc uses a block size of 64 bits).

Many of these concerns also apply to mac algorithms (e.g. eliminating hmac-md5, hmac-sha1-etm@openssh.com, etc, as they use weak hash algos). Of particular note, OpenSSH supports the hmac-ripemd160 and hmac-ripemd160-etm@openssh.com algorithms. RIPEMD160 isn’t that common but, like SHA1, is considered to be weak. One other concern with mac algorithms is the order in which the encryption and mac attachment are performed. Encrypt-then-mac is the preferred way of doing it (i.e., the message is encrypted, then a MAC of the ciphertext is attached). The default used in SSH is encrypt-and-mac, where the mac of the plaintext is attached after encryption. Attaching the plaintext mac potentially leaks information (a mac is designed to provide integrity, not confidentiality, after all). The encrypt-then-mac algorithms are indicated by the -etm suffix.

In addition to the ssh-audit inspired changes, I took the time to review the rest of my standard SSH configuration. The config touches on a few areas; I’m only going to highlight a couple of them:

Here all authentication methods other than public key are disabled. A decent key (used in combination with good crypto algorithms!) is drastically harder to brute force than a very good password. It’s also less prone to accidentally being copied into the wrong place, provided to the wrong server, etc.

Switching UsePrivilegeSeparation from ‘yes’ to ‘sandbox’ tells OpenSSH to employ kernel sandbox mechanisms on the unprivileged process. This adds another layer of defence in case there’s a severe exploit in OpenSSH itself.

An unexpected side effect

After reconfiguring OpenSSH, all of my servers stopped reporting SSH brute force attempts. Every day prior to the change saw hundreds of connections and, after rate limiting and automatic banning blocked a fair chunk, about two dozen unsuccessful login attempts. With the new algorithm selections in place, there were still hundreds of connections, but no failed login attempts at all. A closer look at the logs showed this:

Apparently not a single one of the clients trying to bruteforce their way in supported the one key exchange algorithm I now allow. I guess at some point they’ll be updated with a modern crypto stack, but until then it’s going to be oddly peaceful…